TL;DR; I’ve created a serializer that converts DTO’s (PoJo’s) into HTML (backend) that in turn can be translated to a JSON object to be used by JS enabled browsers (e.g. upgrade snippet to Widget). These mechanic’s would allow a data first (see Progressive Enhanchment) approach. While the solution works and has potential, it does not produce a super fancy render – as it follows the PoJo data-structure and therefore is limited. These limitations could be canceled though by the use of additional directives (e.g. using different tags, including boiler-plating).

More discussion will be needed on this concept.

As i’m currently prototyping a new product to reach a mvp status, i’m also thinking about the future. What technology stack would i use? Would i stick to familiar technologies? Or should i invest time in newer technologies better technologies? How would my architecture look like? What should be the most important aspects of the architecture?

Besides looking at js-frameworks that are capable of server-side rendering (React and Vue (with Nuxt.js on op)), i’ve also been experimenting with the idea to create a set of serializers that would be able to directly serialize a PoJo/DTO into viewable HTML, that in turn can be serialized into JSON for use in advanced/JavaScript-supported webpages.

Prototype: Converting PoJo/DTO to HTML, and HTML to JSON.

So after spending roughly 3 hours i made a prototype that just did that, consisting of roughly 3 components: 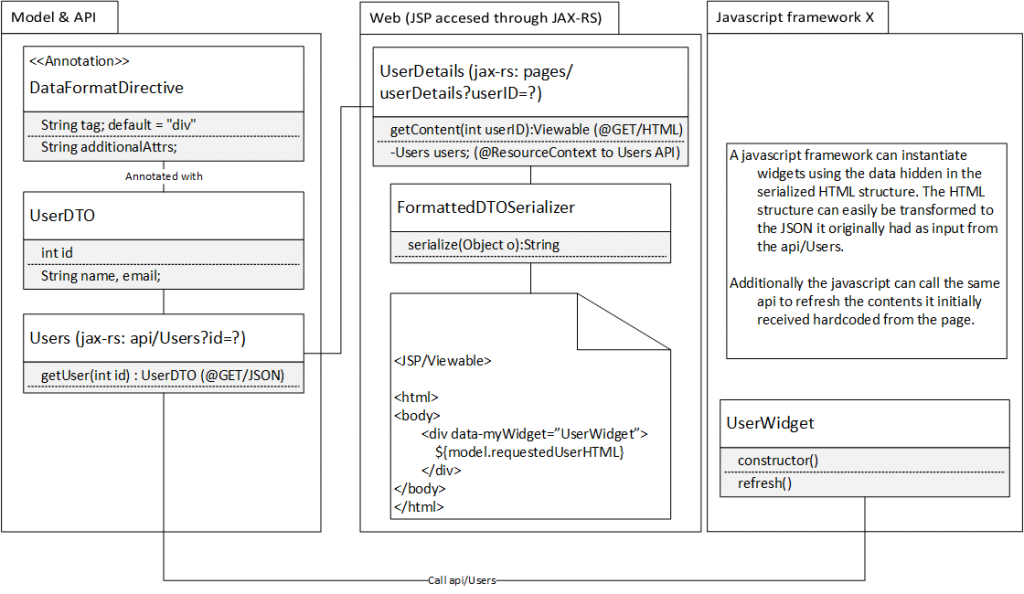 Running the serializer with default options could result in something like the below:

Which without any js/css will result in a pretty dull render. The @annotation however, might be used to change the tag (default=div), add attributes, or even add boiler plating.

With JS enabled, the HTML can be converted to the following JSON, which – is the exact output the jax-rs api normally would return.

Will upload to github after a quick sanitize.